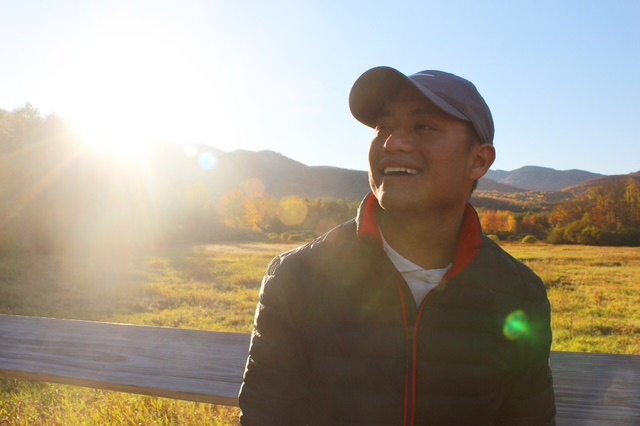 Traveler of the Month Has Traveled for Entire PT Career

Med Travelers Traveler of the Month Nico D., PT, DPT, learned in undergraduate school that going into premed might not give him the time with patients he desired. After shadowing clinicians and volunteering for hundreds of hours in a local hospital, he changed his career direction.

"I looked for a profession where I could spend more time with people and help people better themselves," he said. "And then I discovered physical therapy."

Nico credits his love for traveling and his calling to help people on family experiences. He moved around the country frequently until seventh grade and enjoyed living in new places. At a young age, his father and mother relentlessly pushed Nico toward medicine. He was the oldest of three children and grew up caring for his brother and sister.

In May 2018, Nico graduated from D'Youville College in Buffalo, New York. He met an AMN Healthcare recruiter on campus and became fascinated with becoming a travel physical therapist.

Nico felt going straight into healthcare travel after school was a good decision because he was comfortable and confident in having the tools to succeed. He was used to living in different places, which made him good at adapting and making new friends. He was also sure of his skills and knew that he was a fast learner.

"I already liked to explore and see new things, but I realized I hadn't really discovered much of America, so I decided to travel," Nico said. "Right after I graduated, I went on my first assignment, and it's been one of the best decisions I've made."

Nico started traveling with another AMN Healthcare allied healthcare agency before moving to Med Travelers in 2019, where he met recruiter Kalie S.

"Kalie's fantastic," Nico said. "I like her because she's very transparent and understands my goals. I've talked to recruiters who don't tell you the full story. But Kalie tells me everything I need to know, and then I decide based on her information. If I have a random question, she's always available."

Nico's first travel PT assignment was in Lander, Wyoming, a different world from his home right outside of New York City. The assignment ended up being one of his favorites. He was moved by how hospitable Wyomingites are, especially after getting invited to Thanksgiving dinner just a week after moving to the area.

"I call Lander my 'bucket list playground' because I could do anything and everything I wanted to do outdoors," Nico said. "Hiking, biking, running, climbing, backpacking. I've learned so many different things, even fly fishing. And it wasn't just me being able to do all these things; the people I met were more than willing to teach me how to do them."

Nico enjoyed Lander so much that he's returned for multiple assignments.

He never thought he would live in the South, but Nico took an assignment in Birmingham, Alabama, and fell in love with the state. Today he is working in a hospital in West Palm Beach, Florida, and traveling with his Goldendoodle, Ollie.

Earning Traveler of the Month Honors

Nico's calling to help people has paid off in many ways, including winning the Med Travelers Traveler of the Month Award. In fact, his ability to put patients first and work with all types of colleagues and patients has been helped him succeed throughout his travel therapy career.

As an Asian American, Nico has encountered patients who don't want to work with him because of his ethnicity. But he understands there's a job to do and finds a way to make it work.

"These encounters don't come from an aggressive, hate-filled place," Nico said. "It's more the patient not knowing any better. There's also the typical difficult patients everywhere you go, who don't want to do anything or just want to throw a fit."

But it's not only patients who can be difficult. At one assignment in Oregon, Nico found himself working for a very intelligent therapist who was challenging at times. However, the therapist enjoyed teaching and had essential knowledge to share.

"Instead of coming at this work situation thinking my boss was difficult, I saw it as a way to advance my career," said Nico. "As a result, I've learned so much from him. Having the right mindset is important because everybody's different. People who live in different parts of the world or parts of America have different cultures. So, you need to figure them out. This therapist was passionate about what he was doing, and you can become better because of it."

After finishing the assignment, the therapist raved about Nico to his recruiter, saying he was one of the best travelers he had ever worked with.

One of Nico's greatest strengths is his dedication to patient care and his unwillingness to compromise patient outcomes because of productivity standards. It's not always easy, but he will always defend his goal of better patient outcomes.

Finally, Nico has been a model for setting and achieving one’s goals. He started as a physical therapist traveler with approximately $120,000 in student debt. He didn't want to deal with the debt later in life, so he followed the teachings of financial guru Dave Ramsey and created a two-and-a-half-year plan to pay it off. He narrowly missed his goal, but was able to pay off all of his student debt in just three years.

"I had a great support system, meaning everyone in my life knew that my goal was to pay off my loans," Nico said. "I don't think I would've been able to pay it off as quickly as I did without traveling. You simply get paid more as a traveler than working a regular job."

Traveling has helped Nico build his physical therapy skills as an outpatient manual therapist who is also comfortable working in acute care and skilled nursing facilities. Still, his love is helping the orthopedic outpatient, where he can use his hands to help get patients better faster and maintain health with exercise.

He's been delighted with his traveling career and wants to see Alaska before someday finding a permanent residence. Having enjoyed so many exceptional assignment locations, he doesn't yet know where he might eventually want to settle down.

Meanwhile, Nico isn't shy about sharing his adventures as a travel physical therapist.

"I tell everybody I know to travel, travel, travel, travel," he said. "It's the best decision I've ever made. It doesn't just pay great; you also get to explore the country, meet new people, and immerse yourself in different cultures. I don't think you can grow if you stay in the same area, so traveling has challenged me so much. I used to get nervous and scared about certain things, but traveling has taught me to be confident and face my fears."

READY to advance your career and make lifelong memories as Nico has? Just apply with Med Travelers and our recruitment team will help get you on your way!